Cool pictures, taken by Tatsuo “Ken” Sakurai and myself, of a few beautiful aircraft flying on Saturday, and, Sunday’s final Unlimited Gold race with winner Steven Hinton Jr., his family, crew and friends and the coveted silver winner’s trophy – in his hands.

A really wonderful week of  flying, the action incredible and anticipation high, as Steven was about to race in a different plane – the always impressive P-51D Mustang, a purple beauty, Voodoo, Race 5.  The question on everyone’s mind was, who would be the winner with the unexpected aeronautical switch up?

Would it be the four time winner Stevo, flying a new P-51D or seasoned pilot Matt Jackson flying the super fast, super reliable, P-51D Mustang, Stega, Race 7, with four consecutive wins under her seat belt, flown by the young Stevo?  Well, that question was answered artfully by the steady hand behind the stick, and, here are the pictures to prove who has what it takes to stack up his 5th consecutive win at the Reno National Championship Air Races.

Sadly, missing from the final day of Unlimited Gold racing was another crowd favorite…

On Saturday, September 14, 2013, during the last race of the day, Race 232, a Hawker Sea Fury Piloted by Robert Lee “Hoot” Gibson, pulled up sharply after rounding pylon 9. The pilot made a mayday call after three loud bursts echoed from, what is thought to be, a fuel injected Curtis Wright R-3350-93 engine.  Gibson quickly gained as much altitude as possible to assess the situation, determine a course of action and then make an emergency landing on runway 14/32 at the Reno Stead Airfield.

Who better behind the stick than a five time shuttle astronaut…  Captain Robert Lee “Hoot” Gibson, USN Retired and also a retired NASA astronaut, has flown just about every aircraft manufactured in the US and many others made abroad and was the commander of four Space Shuttle Missions; STS-61-C, STS-27, STS-47, STS-41 and the Pilot of Space Shuttle Mission STS-41-B.

These Billion and one half dollar aircraft (yes, billion), raced through our earth’s atmosphere and into space at speeds of over 17,000 miles per hour.  Therefore, it would seem in comparison, that a mere 480 plus mph this Gold Unlimited airplane has reached, would be equivalent to slow motion here on terra firma for the mega talented pilot racing here at Stead, and, the perfect person to have in the front seat when an emergency situation arises as we witnessed that Saturday.

Gibson skillfully landed Race 232 where the Hawker Sea Fury was towed to the ramp for inspection by her crew.  I happened to be photographing that race when the loud pops were heard overhead.  As the Sea fury passed me, much to my surprise, I captured the damaged cowling as it was torn from the aircraft, and then, as it hit the rear tail, broke into many pieces and became suspended debris for a moment.

The pictures of Race 232 and Gibson as they were being towed to her awaiting crew are remarkable.  The multiple expressions on Gibson’s face were what you’d expect from an astronaut in hair-raising situations such as this; cool, calm and collected.

It may be just me, but I detect a slight undertone of disappointment in his eyes, as this marks the 4th year in a row that a mechanical issue has postponed Hoot’s participation in the final Unlimited Gold Race.  I for one, would like to see Hoot blast through the stratosphere in a space shuttle again, but sadly that doesn’t appear likely, so I’ll be first in line, well, behind his family, friends and crew, rooting for Hoot to find a fast war bird and fly into victory at the 51st annual 2014 National Championship Air Races.

That shouldn’t be hard for our beloved race underdog, should it?   I mean really… so let’s root for Hoot.  By this time next year, it would be a real treat for us to see Hoot finish a Gold Unlimited race, and I’ll bet for him as well.  And, I’m sure whatever award is given to those who place in the Gold, would make a nice addition to this extraordinary aviator/test pilot/astronaut’s 23 plus military awards and civilian honors… which probably are casually hanging around the house – just saying…

Wishing all the best,

Photo 6 – A disappointed pilot being towed to the ramp 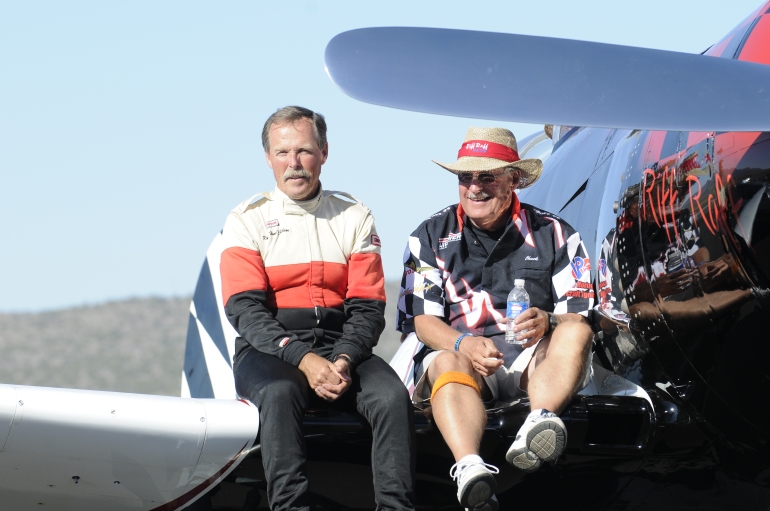