Qualifications are over, heats have been assigned and the pilots are racing!  Some pretty fast times are being recorded – the Jet Class has set a new course record – fastest in the 46 year history of the Reno Races.  Curt Brown, Pilot of “Viper” an L-29 Jet officially raced at 510.605 mph!  (Unofficially 515.516mph) Wow – that’s FAST!

I was privileged to meet with Curt today, via Reporter Guy Clifton, The Reno Gazette, and heard just how much fun he was having bouncing around in his little L-29.  Displaying a few bruised elbows, Curt told us it’s a wild ride in the L-29, a jet with a smaller wing area.  He explained the science behind the smaller wings as transferring air turbulence throughout the fuselage making it the next best bone shaking ride after the space shuttle – the bruises, only a minor inconvenience…!

The day included a practice run for the Blue Angels, performances by Patty Wagstaff in her Cirrus SR-22, the Red Eagles performing their synchronized bi-plane routine and David Martin dazzling the crowd with his aerobatic performance in his CAP232.

Fans attending the National Championship Air Races can help in the fight against cancer and win a jet ride with pilot Curt Brown.

A fund-raising raffle in the Jet Class pits in front of the planes Pip Squeak and Viper, is raising funds for the Cancer Care Connection, a non-profit Web- and telephone-based service that helps cancer victims and their families by

providing free information on the resources available to help them, according to Elaine “Pip” Conklin, a cancer survivor who owns the jets Pip Squeak and Viper.
“It’s for people with all kids of cancer,” she said. “The Internet is a wonderful tool, but what we’ve found is a lot of the research on the Internet is inaccurate. Cancer Care Connection provides all neutral information.”

Tickets are $10 for one or $25 for three. The first 50 people who purchase the $25 package also receive a free Viper or Pip Squeak T-shirt.  The drawing for the jet ride will be held on Saturday. 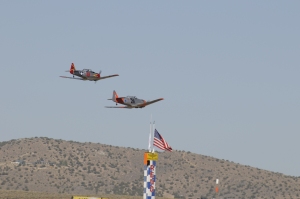 Stay tuned for more from the races!

Leave a Reply to AnneCancel Reply